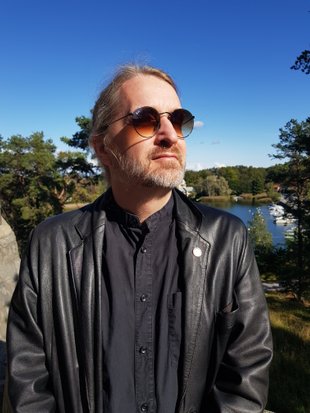 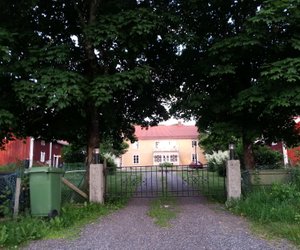 I was born in the revolutionary year 1968 and grew up in the countryside south of Jönköping in Sweden. It was an imaginative environment among animals and dense forests where the creative fervor flourished.

The writer and explorer in me took the first steps. My passion was studying maps and planning cities. Horrified, I saw how the cities were massacred during my childhood and early felt a commitment to create living and organic cities in contrast to the "box architecture". Own countries were also fantasized together and provided with history - and hand-drawn daily newspapers.

After 15 years, I ended up in the industrial town of Katrineholm in Sörmland. There, the musical expression and the rebellious vein were seriously found. The band Captor was formed in 1987 with whom, after a couple of years of intense rehearsing, I released my first album in 1993.

The career path began in earnest in 1987 when, aged 18, I got a job at Sörmlands Grafiska. I was then faithful to the graphic industry until the mid-90s and had then worked as a printer's assistant, screen printer, printmaker and also engraved medals and name tags during military service. However, music dominated my life and I was also involved in starting the rock association Play it Loud.

In 1995, a new phase of my life began when I left my work and music career to seriously devote myself to studies. The following year my first daughter was born. I studied with success at Komvux in Katrineholm and two years later at the newly started education Culture, Society, Media Design at Campus Norrköping (Linköping University). I trained there as a culture and media producer. My old interest in urban environments blossomed and I wrote a master's thesis on traffic planning in Norrköping and its consequences for the old cultural heritage. A project work on the city's cultural environments was also carried out at Norrköping Tidningar. I had then started working with web production.

After graduating, I got a job at the real estate company Framtidsstaden as an information officer. I worked there with building their web pages, compiling information materials and establishing financial plans. My graphic skills were now combined with my interest in the built environment. At the same time, I had started a new musical career with the doom metal band The Doomsday Cult. In connection with this, I became the father of another daughter.

However, I could not drop my studies and returned to university to study Geography a few years later. Here I immersed myself in issues related to the urban environment and seriously studied energy and environmental issues. This was, among other things, about how a possible oil shortage would affect society. I also wrote several works on the conditions for biofuels to replace oil in the transport sector.

I got involved politically during these years as a substitute in the City Planning Committee for the Green Party in Norrköping. Urban planning issues are something that I have always been passionate about. The geography studies ended with a master's thesis on geopolitics and how dependence on raw materials affects power relations in the world (EU-Russia). The acquired knowledge then gave me the opportunity to do a PhD.

In 2008, I began doctoral studies on the subject Technology and Social Change at Linköping University. I wrote a thesis on how the EU's biofuel policy developed. In addition to the history, I mapped actors, networks and political strategies. This also included a comprehensive survey of how the climate issue gained political impact and the motives behind it. After the defense I worked as a university lecturer at Culture, Society, Media Design. There I had the opportunity to build up my own seminar series on Cybernetics/Transhumanism and a critical review of the concept of Sustainable Development. Previously, I had also taught on the Environmental Science program as well as given some occasional lectures in other courses such as Geography.

Between 2017 and 2019 I was a senior lecturer in Geography at Stockholm University. I was now responsible for courses in city planning and globalisation and could combine this with the completion of my book Rockefeller - Controlling the game (which was released in 2019). In late 2020 the Swedish edition of the follow up book The Global Coup d'État was published.

The musical commitment began with renewed vigor in 2011 when the doom metal band Wardenclyffe was formed. In December 2012 the promo Ordo Ab Chao was published in a double edition together with the doctoral thesis of the same name. It was successful and resulted in a record deal and the album Control All Delete which was released in January 2015. It was followed in December 2015 the single The Omega Point/Rockefeller. The latest album Temple of Solomon was released digitally in its entirety on 2/22/2022 and will later be released physically together with a book.

Since March 2016, I have been chairman of the Pharos Foundation, which works for a free debate and research.

Since 2021, I also run the independent publishing house Pharos Media Productions, which publishes books, records and other media productions.